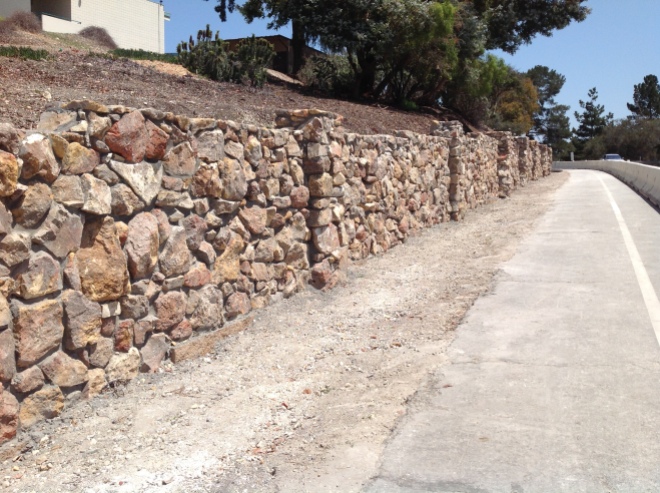 Humpty Dumpty sat on a wall. Humpty Dumpty had a great fall. Well Humpty Dumpty didn’t sit on the Paulding wall on East branch Street in Arroyo Grande, but that wall did fall and has been in disrepair for decades. The Paulding wall is a retaining wall that keeps the land, that Paulding Middle School rests on, from spilling onto East Branch Street as one enters or leaves the village of Arroyo Grande. Paulding Middle School is the former site of Crown Hill High School. Carl Grieb attended High School at Crown Hill and Connie Willems has taught and tutored Jr. High students at Paulding for 30 years.

A sign near the wall shows that it was originally built in 1940 by the Works Progress Administration (WPA) a New Deal program that put unemployed, unskilled people to work on public projects. WPA was involved in several projects in the the Crown Hill neighborhood. The wall began to crumble as much as 40 years ago and the city of Arroyo Grande never mustered the funds to fix it.

Thank goodness for the Arroyo Grande Men’s Club who found some individuals to take on the project and raised funds to see it happen. The wall repair began the beginning of June 2015 and looks like it should be finished here soon.

Construction has confined the traffic driving by the wall on East Branch and forced tight negotiation around the turn as less room is available. This is most difficult for larger tractor-trailer rigs which need a wide turning radius. Thankfully drivers have been cautious and courteous as they drive by and patiently wait for the unveiling of the new and improved wall, re-built by local citizens.

This site uses Akismet to reduce spam. Learn how your comment data is processed.